You’ve heard of robots; what are cobots? 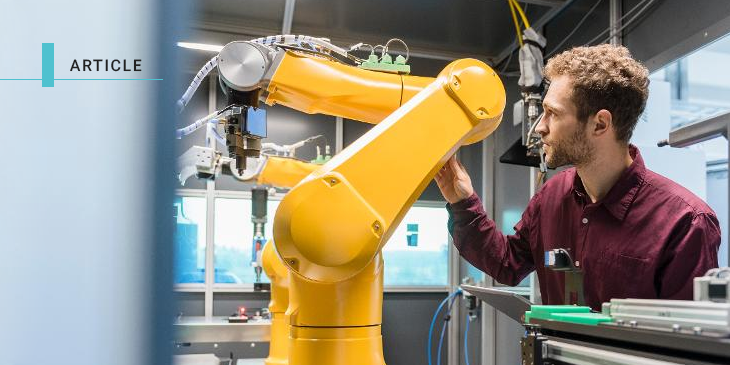 Czech writer Karel Čapek first coined the term “robot” in his 1920 play “R.U.R.”, which is about a dystopian future in which artificial, manufactured “roboti” act human-like and perform tasks in servitude to their human masters, only to later form a rebellion that leads to the extinction of the human race. Many of the visions and dreams about what intelligent machines can be – and the fears associated with them – are in this way related to the origin of the term “robot.”

Physical robots are highly desired in many industries, especially to perform tasks often referred to as the four “Ds”: Dirty, Dangerous, Dear (or Expensive) and Dull (or Demeaning). These robots operate every day in manufacturing, warehouse, healthcare and other situations to perform the tasks that would otherwise be performed by humans with not always positive outcomes. However, to make industrial robots work in a reliable way without causing physical harm to humans, they often must be separated from physical human contact. This means operating in entirely human-free zones or within cages that prevent accidental human contact. Or, if they are roaming about in the free world, they are constrained in their strength and capability so that they can’t inflict harm.

However, constraining physical robots in this way limits their application and power. Companies looking to increasingly automate and enable greater portions of their business that require physical human labor currently need ways to increase the interaction of robots and people without endangering their welfare.

“Collaborative robots,” known by the shorthand “cobots,” are meant to operate in conjunction with – and in close proximity to – humans to perform their tasks. Indeed, unlike their more isolated counterparts, cobots are intentionally built to physically interact with humans in a shared workspace.

Cobots are intentionally built to physically interact with humans in a shared workspace.

While this term may be new to you, cobots aren’t actually new. The first examples emerged in the mid-1990s from university research projects and the General Motors (GM) Robotics center, in which humans would provide the power to make machines move, while cobots would provide the control and steering to place objects with precision. In this way, humans were safe because they controlled the power of the robot while gaining all the advantages in assistive capabilities that the machine would provide.

In many ways, cobots are the hardware version of augmented intelligence that we talk about in the software world. Instead of replacing humans with autonomous counterparts, cobots augment and enhance human capabilities with super strength, precision and data capabilities so that they can do more and provide more value to the organization. Pioneered by robotics company KUKA and further developed by Universal Robots and then Rethink Robotics (now defunct), cobots have increased their footprint in industrial settings both large and small.

Cobots are also trained differently than traditional industrial robots. Rather than being programmed to a specific set of steps, many cobots are trained by humans manipulating the arms and training by example. This video from Rethink Robotics does a great job showing this. Humans control the bot by physically moving it around, with the cobot remembering the steps and perhaps even the end goal of what is being accomplished. It then repeats those steps, optimizing them to achieve increasingly better outcomes.

Broadening the application of cobots

There are a few interesting implications of the “cobot” term and concept. From a technical perspective, it’s interesting that even in heavy industrial applications where traditional non-collaborative robots have been used for decades, cobots are seeing increasing adoption. It’s clear that there are a range of automation and intelligence tasks that previously couldn’t be addressed by “dangerous” robots that can now be intelligently automated with collaborative robotic solutions. If hardcore robotic adopters like automotive and industrial solutions can find uses for cobots, surely the softer manufacturing, logistics, supply chain, warehouse and perhaps even retail and consumer industries can find a range of cobot use cases. Will the Starbucks barista of the future be a cobot? From what we can tell, this is an inevitability.

Cobots focus on the 3 Es: efficiency, effectiveness and enhancement.

More importantly, the entire concept of the cobot is its cooperation and ability to work in close proximity to humans. These cobots are aimed at augmenting what humans do, to make humans more effective, efficient and enhanced. Indeed, if the old robotics focused on the four Ds, then cobots focus on the three Es: efficiency, effectiveness and enhancement.

Since cobots are aimed at helping humans do their jobs better and not replacing them, it’s no surprise that human acceptance and enthusiasm in working with cobots is high. Companies see much greater adoption with cobots working alongside humans than they do with robots that are meant to replace their activities. Many view the term “robot” as scary, but the term “cobot” is more comforting and friendly.

Changing an industry by changing terminology

Sometimes all that’s necessary to achieve new outcomes and benefits is to change the terminology that’s used. Terminology impacts many aspects of technology adoption: how people perceive your place in the market, who your competition is, how the technology can be applied, what concerns and issues may arise and even things like price point and implementation complexity. If you called a car a “person transporter,” you might have a different opinion about what the car is used for, what alternatives to the car there are and perhaps how many people can fit into it. If you call a bus a “multi-person vehicle,” your impressions of what a bus is changes.

Similarly, using the term “robot” might not be a good fit for all autonomous or intelligent applications. Simply calling something a robot conveys something in the mind of the user, adopter and buyer. Calling it something else, even if the technology stays the same, might bring different concepts to mind, since the term “robot” is overloaded with many connotations both positive and negative. Those solutions that are meant to replace humans with intelligent assistants can be called robots, if that term applies. And conversely, those applications where intelligent assistants are meant to work side-by-side with humans can be called cobots, if that term fits. In this way we can separate the fears and desires from using one word with that of another and focus on the application and not the specific terminology.

This article was written by Kathleen Walch from Forbes and was legally licensed through the NewsCred publisher network.